Gamecock Fans Should Enjoy this Era 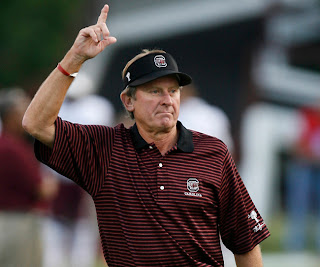 Watching Carolina’s relatively easy 14-3 win in Knoxville on Saturday night, I found myself thinking about just how successful the Steve Spurrier era in Columbia has been.  Don’t think so?  Try juxtaposing it against our football history.  Like it or not, the program has never enjoyed this kind of consistent success.
The Head Ball Coach is 51-34 in Columbia in just under seven seasons.  That 60% winning percentage may not seem daunting, but it is a heck of an improvement over 65-82, which was Carolina’s overall record in the 13 SEC years before he arrived.  In conference games under Spurrier, Carolina is 28-26 with two games left this year.  Again, that might not seem great but pre-Spurrier saw the Gamecocks run up a 36-67-1 SEC record.
It gets even better when looking at how he has dealt with Carolina’s SEC rivals and Clemson.   From 1992-2004, Carolina had a grand total of 9 wins over Florida, Tennessee, Georgia and Clemson.  In roughly half that time, Spurrier has landed 12 wins over those same teams-  2 wins over Florida, 4 wins over Tennessee (including 2 straight), 3 wins over Georgia (including 2 straight), and 3 wins over Clemson (including 2 straight).
Now no one is saying everything is perfect or that we shouldn’t want to do more and keep building.  It is just interesting that the football program is in the best shape it has ever been right now and many Gamecock fans just cannot enjoy it.  I have said many times that Clemson fans are always one game away from claiming they are on a winning streak, while Gamecock fans seem to always view USC as one game away from a new losing streak.
Having watched this program go through ups and downs for nearly 35 years, I have had the “pleasure” of sitting through some rotten football and horrible seasons.  If you had told me in 1999 that we would be 7-1, ranked in the top 10 and leading the SEC East I would have assumed Gamecock fans would be wallowing in happiness and soaking up every second of every game. 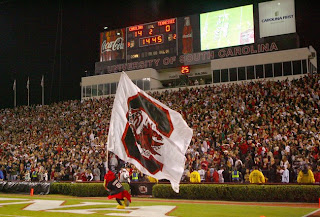 Instead I detect a palatable fear of each week as the landmine that is going to blow everything up and start us on a freefall tailspin back to the 90s.  The next game is a great example of what I mean.  If you’re a Gamecock fan, ask yourself if you view the trip to Fayetteville as a chance to do something great, or have you written the game off as a probable loss so you won’t be disappointed?  I can tell you our Coach intends to go over there and win on Saturday and so does the team.  They aren’t thinking about how they will handle a loss.  They are going to do everything they can to go get a win, and isn’t it nice to finally have a program like that in Columbia?   Enjoy it, don’t endure it!