The Cock-A-Booster CRYSTAL BALL is back... 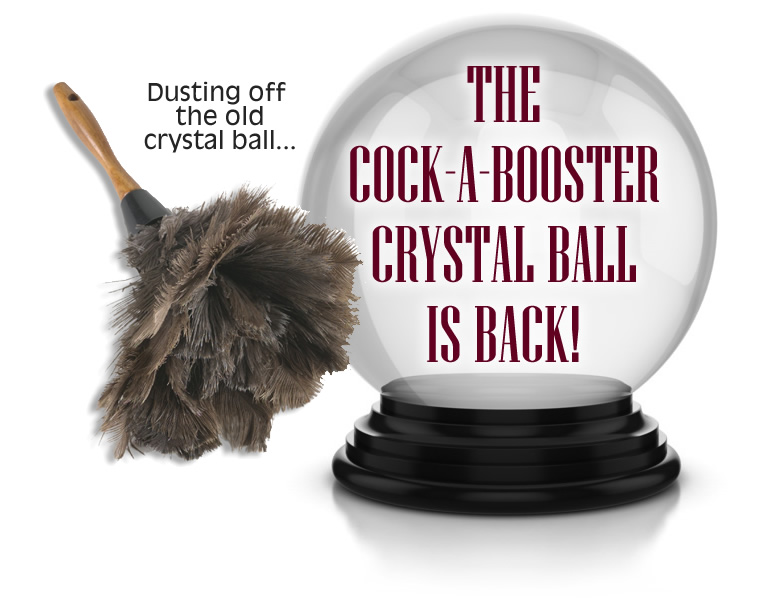 CLEMSON AT GEORGIA
The overhyped puppies from the East Georgia kennels open up their flea-ridden water dish this weekend, hoping to take revenge on some visiting felines from Pickens County.  The Upstate’s favorite Fruitball and his well-paid kittens neutered the barkers last fall, and feel a repeat of the procedure is coming.  But unlike last year, the home canines will be wide awake.
The Cockabooster Crystal Ball says... Georgia by 5

ARKANSAS AT AUBURN
The Porky Piggies from the Ozarks trot their swiny hooves onto the Plains this Saturday, hoping to make the Opelika Scratching post into a pigskin trough.   The fightin’ Malzahns caught a lot of gridiron serendipity last year, and the worm may turn before November.  That won’t be the case in this matchup, and the other white meat is on the menu.
The Cockabooster Crystal Ball says... Auburn by 9

WISCONSIN VS. LSU
Some red-and-white rodents from Camp Randall roll into Houston this weekend, hoping to burrow the Baton Rouge Felines into the Lone Star State turf. The Big 10 needs a win by some group of rats this year in SEC Country, but I doubt the Madison clan will get the job done.
The Cockabooster Crystal Ball says... LSU by 12

WEST VIRGINIA VS. ALABAMA
The Georgia Dome used to be a regular stop for Nick Saban’s elegant elephants, but too much lemonade at Toomer’s Corner changed that up.   The Crimson Clompers want two trips to Atlanta this year, and feel they have the tusks to get it done.  Some sister-kissers from Morgantown feel differently and they’ll bring their backwoods guns to the Peach State to steal some ivory.  They better be shooting just right.
The Cockabooster Crystal Ball says... Alabama by 19

DORCHESTER ACADEMY AT CALHOUN ACADEMY
Chris Myers and his golden pirates sail into the St. Matthews Jousting yards on Friday, hoping to raise the Jolly Roger and snatch some pigskin gold.  The home lancers feel they have sharp weapons this fall, and Adam Jarecki will have the home horsebackers ready to duel.  Go with the gallant gallopers in blue when this one is over.
The Cockabooster Crystal Ball says... Calhoun Academy by 7

TEXAS A&M AT SOUTH CAROLINA
The Richland County Rooster Farm will be rocking on Thursday night, hoping that some Cowboys from College Station get spurred early and often.  The visiting gauchos have no intention of falling prey to the flock, and think they’ll be gigging some poultry instead.  The Head Ball Coach has been clucking quite loudly this summer, which means he thinks the birds have some tough plumage.


The Cockabooster chooses South Carolina by 4

Another MOO U Top Ten!

Top 10 signs Clemson and Georgia are playing each other...

Clemson head football coach and dunking booth regular Dabo Swinney held an impromptu press conference this week, expressing outrage that Steve Spurrier will get a huge mural of himself on Williams-Brice Stadium.  “Sure he’s beaten us a couple of times, but we beat Ohio State.  They may not have cared about being there, but that’s beside the point.  We still won it.  Where’s my mural?”  Clemson’s Athletic Director Danny Rattlecoldfish says the Tigers will give Swinney something even better than the large picture of Spurrier.  “Yes, we’re going to ask our Sororities to sculpt a 100-foot statue of Dabo out of real upstate manure.  The sheer size and smell of it will send a pungent and potent message that anything USC can do, we can do better.” 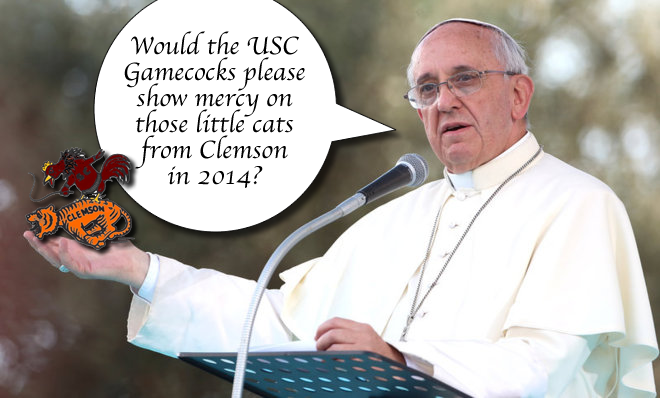 In a historical intervention, Pope Francis is asking Steve Spurrier to stop beating up on Dabo Swinney.  “For five years now, we have witnessed this merciless destruction of Coach Swinney and his Klimpletons by the Gamecocks.  It is time for mercy and healing.”  This marks the 2nd time a Pontiff has sought relief for a sports team or coach.  Pope Benedict once put in a call to Chapel Hill to see if they would let Clemson beat them in basketball there.  Both the Tar Heels then, and Coach Spurrier now, respectfully declined the requests.
Posted by Cock-A-Booster at 10:40 AM No comments: 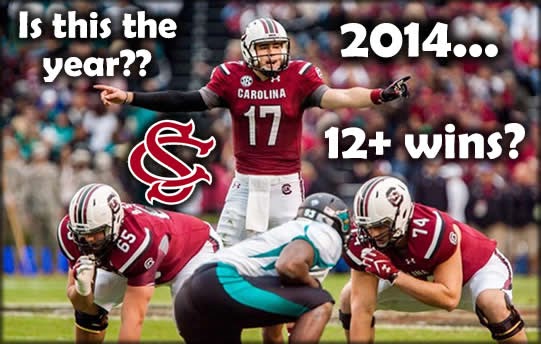 In my 43 years of being a Gamecock, I can think of only one time when I believed we would win 12 games in a football season.  That of course was 1984 and I felt that way for all of one week.  We had just beaten Florida State to get to 9-0 and a #2 national ranking in the AP.  The upset loss the next week in Annapolis crushed my 13-year old heart even worse than the loss at Clemson in 1980.

After that brief moment of sunny optimism was darkened by the Middies, I vowed never to get my hopes up too high.  Heck, even since then when I really would get myself hyped up for an individual game it seemed to jinx us.  The home loss to Auburn and the road loss at Gainesville two years ago spring to mind.  So you can see why I am practically petrified that I find myself (gasp) feeling really good about this fall.

I think my upbeat feeling about this season stems from one opinion I have:  We’re never going to have a more manageable SEC schedule than this one.  We have the Aggies, Jawja, Mizzou and the Vols all in Columbia and Kentucky and Vandy as two of our road trips.  Before anyone screams out “AUBURN” or “FLORIDA” I get that.  My answer is that if we’re waiting for a “perfect” SEC slate it just isn’t going to happen.

We don’t play in the ACC (Aunt Cindy Conference).  This ain’t FSU and the 13 dwarves.  This is big-boy football every week and we’re going to have some tough matchups.  At the very least, this is arguably the best chance we’re going to have to win the East again.  Next year we go to Pup-land, to Mizzou, to Knoxville and to Kyle Field and we have LSU reappearing.

I’ll put words to a feeling many Carolina fans have that needs to be acknowledged:  We don’t have to beat Auburn.  Some teams just seem to have your number and they seem to have ours.  And as the Head Ball Coach has taught us, focusing on a team too much leads to more losses to them.  (Just ask old Dabbles about that).

So while I am saying up front that I have some happy juice in me this fall for some reason, it is what it is.  I think the stars have aligned a bit for us this year and we’re going to win the East.  Too much Splenda in my Iced Tea you say? Maybe.  The good news is that we’ll know pretty quickly if our optimism is warranted.  Try the first three home games against A&M, ECU and UGA.  If we’re not 3-0 at the quarter-mark, uh-oh is all I have to say.  But….run the trifecta and all of a sudden we could be 7-0 and on a 13-game winning streak headed to the Plains.

If it’s ever going to happen, this could be the year. It is a great time to be a Gamecock~!