Thank you to our sponsor! - Attorney Johnny Felder of McGowan, Hood and Felder, LLC


Personal injury accidents leave victims with physical, emotional and financial burdens. Individuals and their families are faced with large medical bills, the potential loss of income and the devastation of suffering an injury.


Too much is at risk. Contact the Attorney Johnny Felder at McGowan, Hood & Felder, LLC, to schedule a free consultation.

MOO U News coming this week!

We will have some MOO U news from upstate starting tomorrow! - STAY TUNED!
Posted by Cock-A-Booster at 11:43 AM No comments:

The Crankshaft Gazette: Young Gamecock Fans getting tired of 9 and 11-win seasons


Jeremy Frankline of Elgin is a 7-year old Gamecock fan who loves football in Columbia but he’s had enough of settling for 11-win seasons.  “I’ve been watching football since I was 4 years old,” said Frankline, who is ready for something better.  “I mean it’s nice to be in the Top 10 all the time, winning bowl games and destroying Clemson every year, but it’s time for more.”

Frankline bristles at the idea that he has never faced adversity like older Gamecock fans.  “How can you say that?  We actually lost to Clemson when I was 2 years old, and we only won 9 games three years ago.  I’ve been through the rough times.”

Jeremy laughs when his Dad tries to tell him about the past.  The elder Frankline points out that as of 2005, he had lived through a 8-26 stretch against the Tigers.  “My Dad was born in 1971.  That is freaking old dude.  I don’t care what happened in ancient times like that.  That was back when Cher was in her 60s.”
Posted by Cock-A-Booster at 11:36 AM No comments:

The Crankshaft Gazzette: Steve Spurrier thinks he could beat Clowney in just about anything 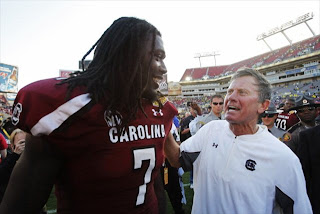 Gamecock football Coach Steve Spurrier acknowledges that standout Defensive End Jadeveon Clowney is a special athlete, but he still thinks he could take him.  “Yeah, old Clowney is a good one, no question.  But I think the Head Ball Coach could still take him.  He’s no Spurrier.”

Clowney is being touted by some as a long-shot Heisman Award candidate, but Spurrier says that isn’t going to happen.  “Nah, you can’t do enough on defense to win the Heisman so he won’t get it.  You need to be a quarterback from Tennessee who plays at Florida to really be a Heisman winner.  Somebody like me.”

Spurrier admits that Clowney is younger than him and maybe in a little bit better shape, but that wouldn’t be enough to overcome the aura he gives off as Spurrier.  “He’ll be a good one, but I am here to remind him he’s got a long way to go.  Clowney is Lex Luger or Arn Anderson maybe, but I’m the Nature Boy of College Football.”
Posted by Cock-A-Booster at 11:30 AM No comments:

WE ARE BACK! - After a short break!

Okay, my friends, I am rested and ready to return to the Cockabooster. We will be posting some new material in the upcoming weeks!
Posted by Cock-A-Booster at 11:25 AM No comments: