Clemson’s head football Coach and Chief Toad-Licker Dabo Swinney says that the Tigers’ pretend run at the Heisman is not the only media campaign they will be pushing behind a player this fall.  Clemson has a wide receiver or two that should be the lead candidates to win High Times’ “Cannabis Cup” for promoting the use of illegal drugs.

“No one has done more to push narcotics into the public in the Palmetto State than we have,” said Swinney, who wants those efforts rewarded.  “Our QB can win the Heisman while one of our Receivers is named ‘The Highest Man’ in the same year.  You can’t put a price on that kind of publicity for the Upstate.”
Posted by Cock-A-Booster at 10:13 AM No comments:

MOO U News: Clemson pretends QB is a Heisman threat 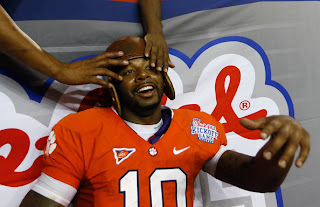 Every once in a while, Clemson runs into a team like Tennessee or LSU in the Peach Bowl who has no interest in being there.  The Tigers, desperate for even the slightest bit of credibility, then convince themselves that it is 1982 again.  Uncle Rico would be proud of the delusion.

But this time there is a bonus to the normal Clemson “Peachy” hype.  The Upstate Udders have convinced themselves that their perennial choking QB is now a Heisman threat.  So in that spirit here are some other awards The Gamecocks’ favorite Clemson signal-caller has just as much of a chance to win this year: 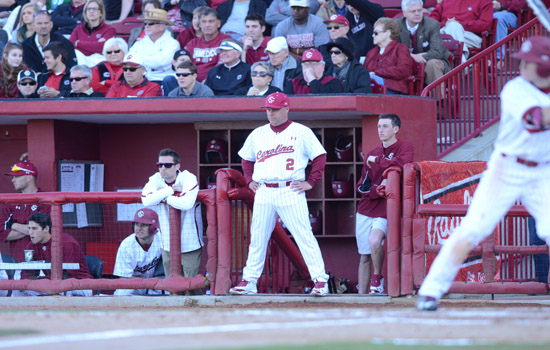 You always want to be the last team standing with the trophy in Omaha, and I fully believe a Chad Holbrook Carolina team will be soon.  But for this year, if you’re being intellectually honest about the circumstances, we pretty much went as far as anyone thought we would.  Yes, yes it’s a shame we gave away the Super Regional.  I get that and was as frustrated as anyone.  But we certainly have benefited from similar things in the past so it all balances out.

The Gamecocks have either 7 or 8 starting position players coming back next year, depending on the lineup.  Jordan “Gumby” Montgomery returns to be the ace and leader of the pitching staff.   Boy has he been impressive so far!  And we have tons of young talent ready to reload just like we always do.  In other words, USC is going to be just fine.

And let’s be honest about the situation Coach Holbrook was in.  He was following essentially the Emperor of Gamecock Sports in Ray Tanner.  To take an injured and young baseball team to the brink of Omaha in his first season was quite a Coaching feat.

Did Carolina pick the worst possible time to play its worst baseball?  Yes.  But if we are now defining “failure” as reaching the Super-Regionals and coming within an eyelash of the College World Series, I am okay with that failure every once in a while.

I am excited about this program and our “new” Skipper.  I can promise you certain other wound-up, tight-rear-ended Coaches in other parts of the state were hoping he was going to be MUCH worse than he is.
Just wait until he gets a couple of seasons under his belt folks!  We’ll be back in Omaha soon!

It’s a great time to be a Gamecock!
Posted by Cock-A-Booster at 10:03 AM No comments:

8.  The Circle K near the Clemson hotel had a Moon Pie/Swisher Sweet special

7.  The IRS has been targeting Jack Leggett

5.  They played better "walk-up" music before ’s -bs (this one was actually sted by Tiger media folks)

3.  No one should have to play baseball on Wayne Brady’s birthday

2.  Got too stirred up because Tony Stewart was finally winning a race When the decision was made to send Clemson to Columbia for the baseball regionals again this year, you just knew that somehow it would end badly for Jack Leggett.   Liberty may very well end up winning the regional and beat Carolina as well, but their knocking off Jack-Leg was purely hysterical theatre.

Leggett, who at age 86 is going back down the “well we are young” excuse path, has been given so many opportunities to slay the Gamecock demons; you would think one of them would go his way.  First were the two meetings in Omaha where Carolina twice came from the losers’ bracket to beat the Tiggers and crush the championship dreams of those in orange.  The 2nd time of course ended with USC winning their first of 2 national titles.

Then Clemson was set to match up with USC in the Super-Regionals a couple of years ago but lost to UConn of all teams.  After Tiger fans immediately made the case that UConn was obviously the best team in the nation, the Huskies were destroyed by Carolina the following week and the Gamecocks were off to Omaha.

Last year, Clemson was excited to be given a chance at full redemption by being put into the Columbia Regionals.  Two losses to USC soon followed and the Gamecocks would eventually go back to Omaha again.

Which brings us to this weekend.  To be fair to the Tigers, I don’t think they were happy about getting sent back to “The Ray” but they again decided it was a chance at full redemption.  So they lose to Liberty twice and go home spanked and embarrassed…again.  The formula for avoiding losing to Carolina is clear:  lose before you have to play them.

Old Jack-Leg seriously needs to think about moving on and leaving his replacement a good hand to work with.  Clemson actually does have some awesome young talent thanks to Leggett doing a “Cocoon”-esque run at recruiting like a young pup one last time in his twilight.  If he stays to coach them, then he better win a title in the next two years.  Otherwise he will permanently damage what right now is a pretty good coaching legacy.

Seriously, if it weren’t for Ray Tanner, Jack’s coaching history looks pretty good.  He has given the Klimpletons some of their finest athletic moments ever.  But because the Tanner era happened, he has become The Man of La Mancha, ripped with madness and paranoia.  Losing those two games to Liberty will only exacerbate things too.

Leggett may be Clemson’s Eeyore and Dabo their Tigger but one thing is clear.  You could just rename Pickens County the 100-acre woods because it is one big Winnie the Pooh fantasy world up there at this point.

It’s a great time to be a Gamecock!
Posted by Cock-A-Booster at 12:14 PM No comments: