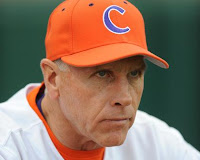 Clemson AD Terry Don Ding A Ling Ping Charles Nelson Reilley Phillps says Leggett’s actions buys him another chance to change his fortunes around.  “I don’t want to get rid of Jack.  He is as insane as Dabo and is a horse’s rear end on top of it.  He’s the perfect Clemson coach.”
Posted by Cock-A-Booster at 12:14 PM