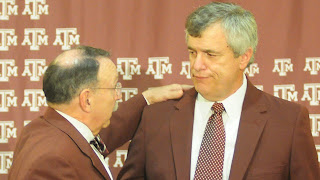 So hopefully Hyman’s interview with the State and this response are the last we have to say about his era in Columbia.  Let this closing statement be delivered and received in the same tone that Mr. Hyman gave the fans all the years he was here:  Thanks Eric for whatever good things you did (or didn’t mess up) while at USC.   Now shut up and leave!
Posted by Cock-A-Booster at 11:58 AM