They did it Daddy Ride! 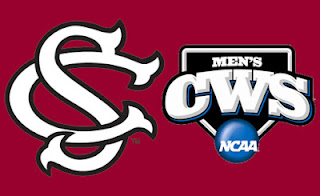 My family’s relationship with USC goes back a generation or two as is the case for many Gamecock fans.  If you’re in that category, and have enjoyed the incredible Ray Tanner era, you probably also have a family member or two who didn’t live to see the national titles and really would have enjoyed them.

I was born blessed with many Gamecocks in my lineage.  My Great Uncle Tatum Gressette dropkicked a FG to beat Clemson in 1920 or 1921.  My Great Uncle Bobby Gressette (Tatum’s brother) was the captain of the USC football team in the mid-1920s.  My late grandmother Helen Gressette Felder (their sister) walked the live Gamecock around Carolina Stadium during a homecoming in that era.  I have that picture at my home today.

But one particular family member stands out today as I think about the Michael Roth-Matt Price era.  My late grandfather, T. M. “Babe” Nelson, aka “Daddy Ride,” was a Gamecock to the core.  He sat with me at so many games in the various sports it’s incredible to think about.  He would have really loved watching these baseball teams.

I think this is the emotion that will eventually be the one most prominent for Carolina fans once the disappointment over last night washes away.  We were alive and witnessed the transformation of USC athletics from a river of bitter negativity into an ocean of excitement.
I know some younger Gamecocks want us all to be all sour and “demanding more” from ourselves today following these losses to Arizona.  I get where they are coming from, but they just don’t understand how bad it really was.  For a mental snapshot, think about where we were in 1999 in all three major men’s sports and you will get the idea.  In football, we went 0-11 and had Clemson fans mailing us zero bars and dancing on our field.  In hoops, we were just dreadful.  And in baseball, Ray Tanner was heading into his third season and still cleaning up a huge mess he had inherited.  It was to me the low point as a USC alum.

So no, I won’t sit here today and be all faux-angry and “demanding” anything from a program that has given this University its greatest athletic achievement in history to this point.  Instead, I am going to kick back, “lean” on our back-to-back national championships, and just think about how much fun this has been and get excited about what is next to come.  So on behalf of “Daddy Ride” and about a million like him, thank you Coach Tanner!  I will always treasure this era in Gamecock Athletics.  And for next year and beyond…”Put me in Coach!  I’m ready to play!”
Posted by Cock-A-Booster at 2:21 PM