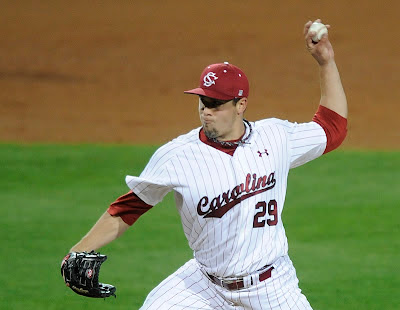 I wanted to make sure and write this article before Michael Roth’s last home start tonight against Oklahoma.  Gamecock fans are all hoping beyond hope of course that this last start will be a gem that gives USC a 1-0 lead in the Supers and ultimately gets the Gamecocks back to Omaha.  For a personality like Roth’s, that would seem to be the way to leave the mound in Columbia for the final time.

And I get the fact that it may be a touch inappropriate to single out 1 individual from such a team of hard-working stars.  (I could just as easily be writing this column today to Christian Walker, Matt Price or Evan Marzilli as examples.  I get that.)  But for old-school Gamecock fans like me, Roth will just always hold a special place in our hearts for the night that changed his career...and saved the 2010 season.

On Friday, June 25, 2010, Roth woke up a situational reliever who had only twice gone more than three innings as a Gamecock.  His prior start to this night was 14 months back!  Oh, and yes, there was that minor detail that we were playing Clemson who was hungry to pay us back for Omaha 2002.  Maybe we should have guessed something was coming, because in that 2002 CWS, Steven “Bondo” Bondurant stepped up and pinned a complete game on the Tigers. 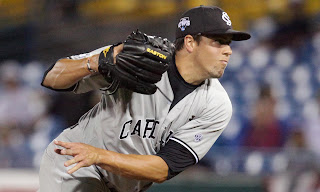 But no we didn’t see it coming.  Roth was expected to make it into the 5th inning at best.  Instead, he went all the way tossing 109 pitches, turning his arm into jelly, taming the upstaters and establishing a legacy that will make him a legendary name in Gamecock athletics forever.
I know the better storyline this weekend is how Oklahoma and USC met in that same CWS in 2010.  I remember vividly the big hit from Jackie in extras that tied things up and kept us alive.  The Sooners are a confident and big-talking team and have the “revenge” card on their side too.  Either team that wins this super regional will be a tough out in Omaha for the Gators. 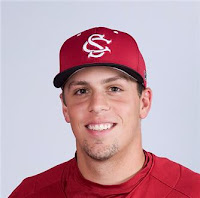 But win or lose tonight, Michael Roth has done so much for this university’s athletic history!  AND he’s one of the most likeable people you’ll ever meet.  So while he is part of a unit that has built a well-earned reputation as being “team” centered with different stars every night, I am singling him out just this once for praise.

As the father of a 6-year old, I will be telling my son the stories of Roth’s career for a long time.  And he’ll get sick of hearing about the night he took those Orange Tigers down in Omaha and saved that magical run at our first national championship.  So Michael, here’s a toast to your brilliant career on the day of your final start.  Thank you so much for everything and good luck in the future!  You will always be a Gamecock Legend!
Posted by Cock-A-Booster at 11:48 AM