Which is it Naysayers? 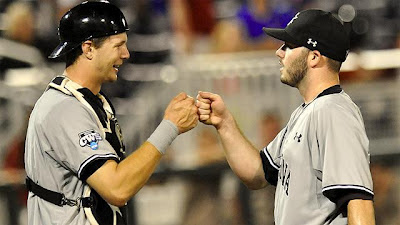 Whether or not South Carolina beats Arkansas tonight in Omaha, the Gamecocks have already gone much further than the naysayers were predicting (or hoping) we would.  Even if USC doesn’t score another run and comes home Thursday morning, this young team has defended its titles with gusto, has made the University proud and has continued scripting a golden legacy for Ray Tanner in the Carolina Annals.
Meanwhile, the same naysayers that practically guaranteed getting to a Super Regional was the absolute best we could hope for are now saying we should be demanding another national title.  (Yes, yes, some have instead fallen back on the “College Baseball is not important” nonsense even though ESPN is all over it but I digress…)

Get over it naysayers.  You were wrong about the Gamecock baseball team one way or the other.  If we should be demanding a title now as the only acceptable end to the season, you were dead wrong about how good we were all year.  If you were right about that, then we have overachieved getting this far.  Actually, strke that.  Go ahead and keep on contradicting yourselves and being miserable if you like.  It makes for good fodder for my blog so go for it.  I can assure you that those of us who are just enjoying the success of the program and not “enduring” it will keep on rolling.

Who knows what will happen tonight and later this week?  Could we win another title?  Of course we could.  Could we lose the next 2 and go home?  Of course we could.  The Hogs of Arkansas are quite confident heading into this evening and they have a big-talking, talented and cocky team.  Their head Coach is all but promising a win and says they intend to knock the Gamecocks off their perch.

Regardless, Coach Tanner and crew have given us another 45 win season, another trip to Omaha and will finish in the top 5 in the nation.  The nation continues its torrid love affair with Michael Roth and if Saturday was his last gem it was a good one:  knocking off #1 Florida on ESPN!  The spirit stick, fear the fish, and the rituals in the dugout are images that will last for years.

So go ahead naysayers.  Continue the never-ending quest to prove this baseball program is (gasp) not perfect.  The good news for you is that at some point we aren’t going to be national champions anymore.  What a day that will be for you.  Meanwhile, we’ll have to find some way to live with our two national titles (and maybe a third!)  Something tells me we’ll manage.