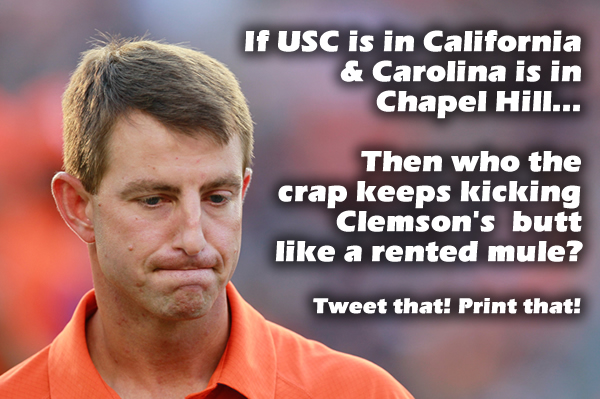 It has been an exciting year for Tiger Athletics.  It started with Moo U winning the world’s tallest midget contest in Charlotte and “barely” losing to Carolina and West Virginia.  Then the Orange Kitten Hoops Club almost defeated a Gamecock team having its worst year ever and firing its coach.  Then recently, Clemson came very close to winning a game against Carolina at the NCAA Regionals in baseball.  (In fact, they almost won twice!)  With that kind of near-success under their belts in the three major sports, Tiger fans can now declare themselves as “Moral Victory U” for the near future.

And the baseball “near-winning” couldn’t have come at a better time.  There was some concern in the upstate that only men’s hoops and football had come to terms with losing to the Gamecocks while still being able to fool the fan base.  And baseball still has some work to do.  After all, in football, the ACC finally is bad enough that the Tiggers (despite getting “pantsed” in Columbia) earned the right to embarrass the rest of the ACC in the BCS.  So Dabo and crew get to pretend that’s what they really want anyway.  Meanwhile, on the court, where the Tigers have never won the ACC tournament, they point to the overall strength of the ACC as a reason to not worry about beating USC.

So now you can add Jack Leggett’s baseball team to the “on the right path” list.  After all, his team gave Carolina a tough, close weekend.  And “almost winning” is the new standard in Tigertown.  Perhaps that’s why Terry Don Dangle Dat Dingle Dunlop Phillips extended “Dabo The Crazy’s” contract recently, sending Gamecock fans into a near euphoric celebration.  After all, West Virginia’s favorite coach has led the way in showing how you avoid “actual wins” but still get credit for winning when your recruiting looks good on paper.  It won’t be long before Brownell and Leggett receive similar extensions.