Gamecocks must stay loose against Wildcats 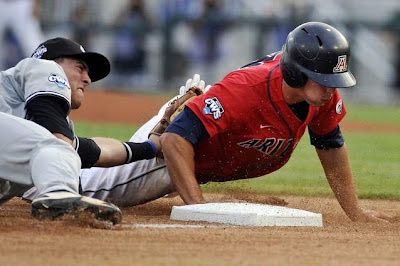 During this fantastic three year run USC has enjoyed in baseball, I can’t remember a time in Omaha where we were viewed as the “favored team” by the national media.  Okay, okay, there were individual games where we were the favorite like the opening game against A&M last year, Kent State this year, etc.  But generally speaking we are viewed as the underdog and that seems to be the case again as we head into the finals against Arizona.

Now I am not one of these fruit loops that go around obsessing over ESPN’s every comment as being an attack on the Gamecocks.  Outside of Orel Hershiser, who apparently had his favorite dog killed by a Gamecock fan, I don’t see any “anti-Carolina” bias.  What I DO see is a team that baffles the experts due to intangibles.  More than ever, we will need those intangibles to write one more chapter in our Omaha Annals and land a three-peat.  Whether you call it staying loose, having fun or just acting like Michael Roth, this unique personality is at the core of why the Gamecocks defy the odds and just win.

That’s Carolina’s baseball team defined.  When we were exhausted in 2010 and about to play the well-rested and heavily-favored UCLA juggernaut, all the experts guaranteed a Bruin sweep.  Fortunately, we didn’t get that memo.  In 2011, Virginia and Florida were both on a roll and on paper were much more talented than us.  Fortunately, we didn’t get that memo.  Now, here we are in 2012 and Arizona is well-rested, viewed as the best hitting team in the nation and well-rested.  And once again, the media experts say the Wildcats will roll.

I can promise you that I know very little about baseball and maybe this is the year that these experts finally get one right.  I mean eventually if they put their heads down and keep picking against Tanner and crew we will eventually lose and they can say, “See we told you so.”  They may have been wrong 20 times before that but I digress.
The memo has gone out to the world declaring Arizona to win easily and that’s okay.  Here’s to hoping that my favorite group of bumblebees from the Midlands ignores all the data and science once again.  Just keep on flying, Omaha style!

TRUST IN TANNER!
Posted by Cock-A-Booster at 9:59 AM