Our annual trap game to open the season! 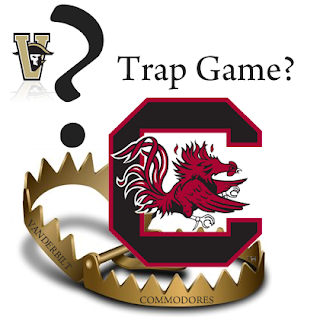 Before I set out my reasoning for why I am not a fan of the setting of this first game, let me be crystal clear on one point:  I predict and believe we will not get upset on Thursday at Vandy.  Spurrier has likely done a yeoman’s job playing the film of the last time we opened the season in Nashville as a favorite.  For that matter, he could have popped in the Kentucky game from two years ago where they upset us and made fools of themselves celebrating.  Or you could watch last year’s Auburn game as another example of how we always seem to cough up a stinker each season.

Thursday night won’t be that game for 2012.  I see Vandy more in the role that we were before “The Blackout Game” against the Head Ball Coach and his Gators in 2001.  Winning SEC teams get used to being a program that everyone else goes Cuckoo to beat.  Heck, Clemson is in a state of near-drooling obsession with beating the Gamecocks which shows you how things have changed.

So will we run into a toe-stub at some point?  I hope not but probably.  Maybe Mizzou at home for example or Florida in the Swamp.   The bad bonus thing is that in a year where Georgia has essentially been given a freebie schedule and allowed to move games around to make them comfortable, we don’t have the luxury of making an error.   But outside of the whining puppies in Athens, every SEC team has to deal with this when they have a team that is capable of winning a championship.  LSU, Alabama, Arkansas all must run a murderer’s row of games to win a title.  Carolina and Florida do as well.

And IF we’re as good as I think we are, and knowing we have to go to LSU while Georgia is doing their nails, we must not lose against the Commodores!  For the three Vandy fans reading this, do NOT take this as a shot at your team.  I love James Franklin and what he is doing.  Finally Vandy has the right coach that fits in my humble opinion.  But if we’re being honest, we are the more talented team with more on the line and we should win this ball game.

For an old-school negative Gamecock fan like me, every time we win one of these “dangerous” games, we fade a little bit farther into the background.   And we couldn’t be happier to keep on fading out into irrelevance too.  So let me finish with a positive thought headed into 2012: What a great time to be a Gamecock fan!  I remember 1998 and 1999 very well and am so thankful that we are now a team that is “worried” about only winning 8 or 9 games.  The goal of being “bowl eligible” is now a distant memory and the goal “winning the Southeastern Conference Championship” is where we want to be.
Posted by Cock-A-Booster at 9:52 AM