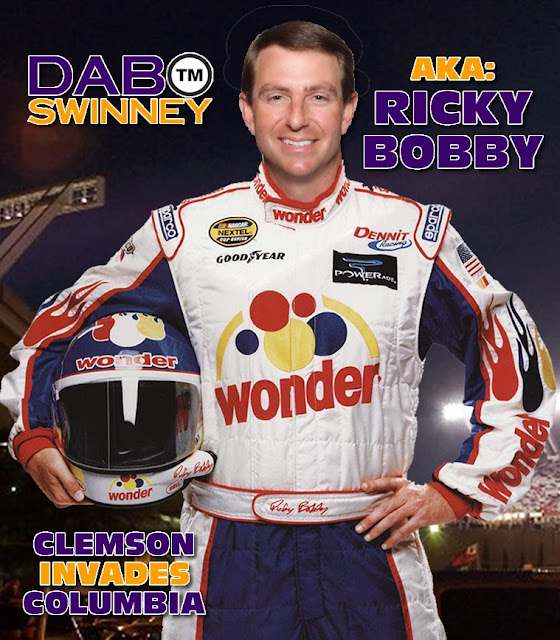 Carolina-Clemson week is finally upon us!  The 9-2 Gamecocks are back in the Top 10 in both polls this week after just shellacking the Myrtle Beach Mudhens on Saturday.  Lots of hurting starters got some much-needed rest and we survived the in-state contest with very little damage and no major injuries.

Enter in our very cocky and over-confident hillbilly cousins in Orange Overalls, and it must be rivalry time.  The loud-talking kittens feel like this is their year to end their losing streak to USC.  Coach “Ricky Bobby” will be leading the way and will probably be the first to run onto the field, trademarked sweatshirt and all, screaming “THAT JUST HAPPENED!”  But I digress…

Based on the fact that I have never seen a team win 5 in a row in this series in my lifetime, AND that the ACC officials have something to protect this year for the Aunt Cindy Conference (The Tiggers’ at-large BCS bid), it’s hard to see Carolina winning this game.  Don’t misunderstand, I get it that it could happen.  After all, Connor Shaw has never lost a game starting in Columbia.  We have the nation’s longest home winning streak for a reason too.  And you bet that Tajh still gets happy feet and makes big mistakes with pressure on him.  And yes, this is only the 2nd real defense he will have faced this year.

And I think the Gamecocks are probably just sick and tired of hearing about how wonderful their orange neighbors are considering they have done so little to earn the right to say that.  At least we have given two currently ranked teams (#5 Mizzou and #19 Central Florida) their only losses this year, and both on their fields!  Clemson’s signature win?  Barely beating a Georgia team missing ½ their roster and completely focused on playing USC the next week.   Granted, Carolina’s loss at Tennessee was just dreadful.  No question.  And no, Clemson did not lose to any of the high schools they had to play (thanks to an assist from the zebras up in Raleigh but I digress).

The bottom line is that this game just “feels like” a Clemson win.  Maybe that is just gas from the Mexican food I ate the other night but I don’t think so.  I have the Tigers winning 31-20.  So yes, we will have to put up with a whole bunch of nonsense for one night, but as I have said many times:  If every Clemson QB wants to just get his tail kicked by us for a few years before he sneaks out of town with a win in his senior season, I am okay with that.

After all, no matter what happens Saturday, Boyd has been one of the best Clemson QB’s to enjoy if you’re a Gamecock fan.  And they lose him and a lot more than we do next season as we’re the youngest team in the nation.  So can you imagine what sort of redneck spectacle the crazy one will perform after the game if they win too?  He may actually sacrifice a live goat and have himself crowned at midfield! “THE GREATEST COACH EVER TO POST A 2-4 RECORD AGAINST CAROLINA!”  You can hear it now.  And he’ll also point out that he was only a couple of losses away from a winning record.  Whatever it is, it will be pure internet gold.

And if I am wrong, and Clemson actually does lose this game to us despite all of the stars lining up for them…Well, all I can say is that it will be one of the absolute funniest and epic meltdowns in the history of sports.  Yeah, old Ricky Bobby will find out that his smoking hot fan base will be running to Cal Naughton, Jr. in a hurry.