MOO U News: Dabo to USC: “How dare your students not enjoy our taunting!” 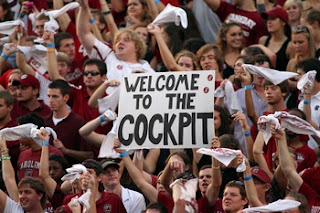 Clemson’s head football coach says he didn’t appreciate the way his players and coaches were treated by the USC student section as they were leaving at halftime and following the game on Saturday night.  He says he can’t understand why Clemson’s long-standing tradition of lining up in a row, arm-in-arm followed by his players trash-talking the Carolina students wasn’t respected and appreciated.

“They really should just sit there and take our trash talk and not react at all,” said Swinney, who feels that his players were put in harm’s way as a result.  “I mean, if you’re going to tell me that somehow we’re responsible because they don’t know we show our rear ends like that before every game, then that is sad.”
Dabo went on to say that if USC fans aren’t careful, then they may be subjected to some rude treatment or taunting when they come to Clemson in the future.  “As far as I know, not a single Clemson student has ever said an unkind word to a Gamecock player or fan up at Death Valley, but I guess that may change.  If we can’t pick a fight with USC students without them fighting back, then I am sad for the sport itself.”
Posted by Cock-A-Booster at 10:49 AM