Spurrier is right: Shaw is the best 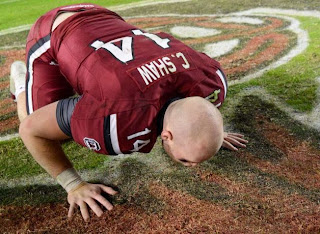 There will be no SEC Championship for Connor Shaw as a starter.  There will be no BCS bowl bid for him either.  He did not lead the Gamecocks even to an SEC East Championship.  So why is it so clear that this quiet, unassuming guy will go down as the greatest player to ever start at quarterback for the University of South Carolina?

First let’s look at his competition for that title.  How about Tommy Suggs? Suggs led the Gamecocks to our only conference championship, he was 4-0 against Clemson as a starter (3 with the varsity as in those days there was a “freshman” game), and his name was all over the record books when he left town.

Some folks will also make a case for Jeff Grantz.  My Mother would be one of them that strongly feel Grantz should be in the discussion and I understand that.  Grantz is a hero for his 56-20 win over Clemson in 1975 and he was fantastic at putting points on the board despite his teams having no defense.

How about Steve Taneyhill, who was the honorary game-starter on Saturday night?  Taneyhill turned the state upside down with his confidence, swagger and knack for inspiring his teams.  Add in two memorable wins in Death Valley when they were needed the most, numerous passing records, and USC’s first ever bowl win and you have a great candidate as well.

With all due respect to these three (and any others you want to toss out), Shaw is #1 in my opinion.  Before anyone hops up and down demanding a definition, I am not talking about passing yards, TD passes, etc.  I am talking about the broader question of “overall” best QB.  Here are my arguments for why I field the Bald Baron is the best of all-time:

So you can isolate a stat or two and point out that other signal-callers have better numbers, but you’d be hard-pressed to find someone who has excelled at so many different aspects of the game as #14.  The fact that he asks for absolutely zero recognition for it in the age of social media and prima donnas only bolsters his case as far as I am concerned.   So mark down the Cockabooster as agreeing with the Head Ball Coach about Shaw:  he’s the best ever.  Period.  It’s a great time to be a Gamecock!