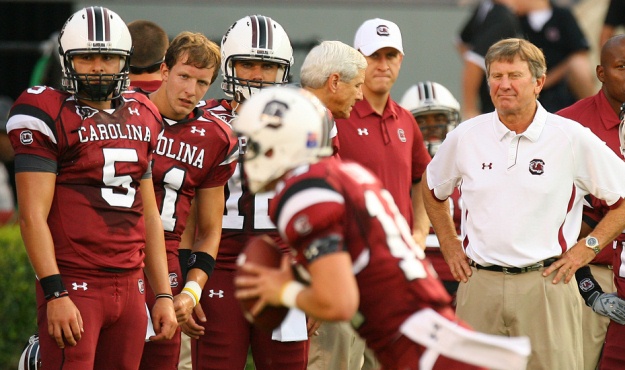 Stephen Garcia.  For some Gamecock fans, he will always be the Warrior who was targeted by a hypocritical AD and his wife who were determined to get him out of town.  To others, he was an underachieving narcissist who had to get kicked out of the program to grow up.  Garcia’s strengths and weaknesses were crystal-clear.  There is no question he had guts and gravitas.  He showed up for the biggest games, including a mauling of Clemson at Death Valley, saving the team against East Carolina after we were down 17-0 and winning at the swamp against Florida when the Gamecocks landed an SEC East Championship.  His signature performance was the home win over #1 Alabama with Gameday on the scene.  Then his Grandfather passed, we lost to a sinking Auburn team and Garcia was suddenly gone.
Enter the Connor Shaw era in Columbia.  Shaw immediately became the Choir-Boy “manna from heaven” for some Gamecock fans and Steve Spurrier.  Shaw was asked to salvage the end of last season and he largely did that.  He threw a jump ball pass that Alshon somehow snagged to save us at Miss. State.  We beat Tennessee that year 14-3 in a game that the Vols basically didn’t participate in.  But Shaw looked like a deer in headlights getting thrashed at Arkansas.  A home win over Florida and a home romp of Clemson made everyone feel better about Shaw, and then the Citrus Bowl seemed to cement that #14 had become the man.

This year’s complete rout of #5 Georgia in Columbia had Shaw at the pinnacle of popularity and we were confident #14 was going to triumphantly lead us into Baton Rouge and Gainesville.  Garcia was an ancient memory at that point and had been long forgotten.  Then came Shaw’s devastating interception at LSU.  This was followed up by his almost frail, turnover laden showing at the Swamp.
Like a woman longing for another fling with the “bad boy” she had finally dumped, Gamecock fans were starting to wish they could have one more fling with Garcia.  Stephen may not have been a role model, and he may have been hungover with three women on his arms, but he could have handled Tiger Stadium and the Swamp.  Shaw’s three chances in a hostile road setting had been failures.  All of a sudden, “thank goodness Garcia is gone” became “if we had only had Garcia there….”

Mercifully for all of us including Shaw, Dylan Thompson came in and saved the day at Clemson.  I honestly wonder what would have happened to the mindset of Carolina fans if #14 had lost at Death Valley.  Besides making Thompson an instant cult hero in the Gamecock annals, that win also allowed a HUGE exhale for us as a fan base.

So perhaps it was fitting as we head to Tampa and the Outback Bowl, that the Gamecocks will be practicing at Garcia’s high school.  Pretend all you want that there is no Garcia elephant in the corner.  Spurrier being asked about it at a recent press conference, and the Head Ball Coach’s angry reaction say it all.  He knows there are people whispering it about what was lost at LSU and Florida, and what could have been lost at Clemson were it not for Dylan.

The good news for Shaw is that 2013 offers him numerous chances to conquer his “El Guapo” if you will excuse the reference to “The Three Amigos.”  For example, we play at Georgia right off the bat in Athens and we’ll be counting on “the little bald QB that could” to land his first signature road win then.   In the meantime, let’s get a big win over Michigan and finish 11-2.
It’s a great time to be a Gamecock!  HAPPY NEW YEAR!!
Posted by Cock-A-Booster at 5:02 PM