Michigan reporters should really get over themselves 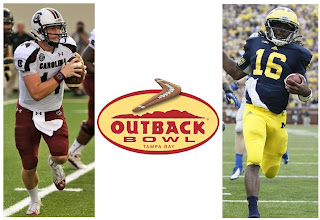 I have lots of friends who pull for “Big Blue.”  I know a lot of really cool people from Michigan so my column today has nothing to do with them.  But after a Michigan beat reporter asked Steve Spurrier in the Outback Bowl Press Conference, “Would a win over Michigan raise your program to another level,” I had to laugh out loud.
Michigan may upset Carolina on Monday.  So to the moron who asked that question…USC is considered the better team.  The program that could raise itself with a win is the Wolverines, not the Gamecocks.

This is not your Father’s Michigan or South Carolina.  So with all due respect to any Big 10 idiot who is still stuck in the past about them I hope you realize you are sounding like a certain upstate school in the Palmetto State.  Nobody cares what happened in college football during the 80s anymore.  Seniors who graduate from either school in May will have been born in 1992.  Yep, we now have folks graduating from college who were not born until the Gamecocks were in the SEC.
I am an old fogey so I have the luxury of being ancient enough at 41 to remember the two times Carolina and Michigan met in the 80s.  I watched the game at the Big House at Carolina Coliseum and I saw Michigan beat us in Columbia in 1985.  The only mental picture I even have of that second game is their 6’ 10” Tight End named Paul Jokish or something like that.  Monster of a guy!
No, if Carolina wins on Tuesday it won’t mean anything more to our program than beating Nebraska in the Citrus Bowl last year did.  We gained nothing in terms of the stature of our program but we landed our 11th win of the season which was nice.  Same thing this year.  If we win, we get 11 wins this year and a win over a team that was good when Reagan was President.  Nice.
But if Michigan wins, you will hear about it from sea to shining sea that a Big 10 team knocked off an SEC power.  The print media industry in the Midwest may have a temporary rebound from the insane euphoria you will see if that happens.  In other words, it will be Michigan that gets a program boost from a win, not South Carolina.
Again, this is not intended to insult or demean anything Michigan accomplished in those earlier eras in College Football.  Bo’s teams were fun to watch and Hoke may return them to that former glory.  We shall see.  But in the meantime, here’s hoping Tuesday’s game is fun, well-played by both teams and showcases two great conferences in a positive light.
And to that one reporter…go soak your head.  It’s a great time to be a Gamecock!  Happy New Year!
Posted by Cock-A-Booster at 6:34 PM