I don’t envy Frank Martin…but I do support him! 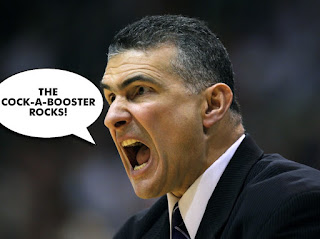 As far as the fans are concerned in the SEC, football and baseball are the King and Prince in the Royal Court.  Outside of Kentucky, and sometimes Florida, basketball is largely ignored or at best is a distant third in the pecking order.    Now this opinion has nothing to do with TV contract revenue or which sport generates more funding for the schools or any of that blah-blah-blah.  I am talking purely about what the fans actually put enthusiasm and focus.

That’s what makes Frank Martin’s job so difficult, and it’s why Gamecock fans need to get behind him and keep him enthused as he goes through his lumps these next few years.  Just like Spurrier and Tanner were allowed to do, if Martin can somehow survive through that VERY difficult first 4 or 5 seasons, the entire culture around basketball in Columbia might start to change.

Folks may look back on the Tanner and Spurrier eras at this point and think they were all just instantaneous success stories but that is far from the truth.  After Spurrier’s fourth season, USC had been pistol-whipped by Florida, Clemson and Iowa and the coach was seriously thinking about leaving.  He instead plowed through it and our entire mindset about the gridiron has been altered.

Now I will grant you that Coach Tanner’s road was a little easier, but he had more history and tradition on his side coming in.  Still, after losing to U-La-La in the 2000 Super Regionals, the nation’s best team on the diamond didn’t even get to Omaha.  It wasn’t until we had the miracle against Miami and knocked Clemson out of Omaha in 2002 that Tanner was completely secure.

And if you think those two situations were tough, now think about what Coach Martin has in front of him.  Like Coach Tanner, he inherited a program that has tasted previous historical success.  The Frank McGuire era will always be viewed as the one time hoops ruled in South Carolina.  But the baseball program at least was still mediocre and had a pulse when Tanner took the reigns.  Bad, but not dead.  USC basketball was a corpse when Martin arrived.  And at least football had the SEC going for it which gave Spurrier the assists he needed with revenue, visibility and facilities.  Who gives a rat’s rear end about basketball outside of Rupp Arena in the SEC?

I took my son to see the Carolina-Clemson hoops game last week.  What I saw was an ACC basketball team that was bigger, stronger and faster impose its will on us and beat us up.  It was really what we looked like in football imposing our will on Clemson at Death Valley this year.  A bigger, stronger and faster SEC football team just beating up an ACC team.    So no, I don’t envy Coach Martin, but I am dadgum glad he is in Columbia.  Given the time and patience and space he needs I think he could be our “hoops” Tanner or Spurrier.