Mixed reaction to Outback Bowl is a GOOD sign! 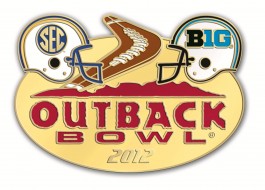 Carolina’s reaction to being paired with Michigan in Tampa hasn’t been one of too much disappointment OR too much excitement.  I would say most of us feel like playing the Wolverines is a solid matchup, and one that offers us a chance to show off our rising program to the nation on New Year’s Day.  But we also hope it is a stepping stone to better bowls in the future, AND for the first time we deserve better than this bowl.  That’s a GOOD sign folks.

The first time we went to the modern Outback Bowl in 2000, we were downright giddy, as we should have been.  40,000 Gamecocks jammed into Tampa and Ybor City and gave La Terasita its best New Year’s ever.  Then in 2001, we weren’t quite as enthused but we still felt like the Outback was a “big deal bowl” and we still felt great.

What turned the worm on all this was the third appearance against Iowa.  We didn’t have ANY business being there that year and our fans knew it.  We had just had our rear ends handed to us by Florida and Clemson and we were in no mood for that trip.  If there was ever a year that we should have just taken a lower bowl and done so quietly, it was that season.  Instead, there was a cloud of negativity and nastiness around the trip and as expected it went badly.  Iowa rolled to an easy victory and Spurrier was actually thinking of leaving Columbia.

But in NONE of those years did we think we “settled” for the Outback.  I think we do feel that way this year, and that’s okay.  But since that feeling of “deserving more” is there, we need to prove it valid.  We should go and flood Tampa again, get our 11th win for the 2nd straight year and head into the offseason on fire.

Next year is ripe with opportunity.  Georgia finally will have to do more than get their nails done.  The pups play LSU although it’s in Athens, and they play at Clemson.  So their schedule for once has a minor pulse.  Meanwhile, the Gators play in Columbia and play at LSU.  We still have a three road-game in a row stretch next year, but at least we don’t play LSU or Alabama.  We travel to Athens, but we get the Gators at home.  Bottom line?  The goal for us should be 11 regular season wins.  That would allow for one hiccup, maybe in that ridiculous 3 game road stretch of Arkansas, Tennessee and Mizzou.

The foundation for meeting this goal will be built if we take care of business in the Outback.  Michigan WILL be ready to play, as all teams that get a shot at SEC teams are in bowls.  Nebraska came out firing last year and the Blue and Gold will also.  If we react right, we will get a big win and shine!  It’s a great time to be a Gamecock!
Posted by Cock-A-Booster at 9:41 AM