Other News from CAROLINA... Spurrier and Dabo confirm: “None of our nude photos were hacked” 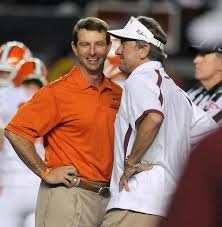 With Hollywood reeling from the recent hacking of celebrity nude photographs from some phones, Steve Spurrier and Dabo Swinney were quick to assure Gamecock and Tiger fans they had not been victimized.  No nude photos of either coach were hacked as part of the scandal, which was a huge relief to the Palmetto State.

Spurrier carries an iPhone 5 Black Diamond edition by Stuart Hughes, valued at roughly $16.5 million.  Dabo has an old Poloroid Square Shooter 2 Instant Film Land Camera, vauled at $16.99 on Ebay.  When asked if either of them had ever put any questionable images into “the cloud,” Spurrier said he had not.  Dabo said he didn’t think so  but noted, “Sometimes at night when the flash bulb goes off real bright it gets up there.”
Posted by Cock-A-Booster at 3:45 PM