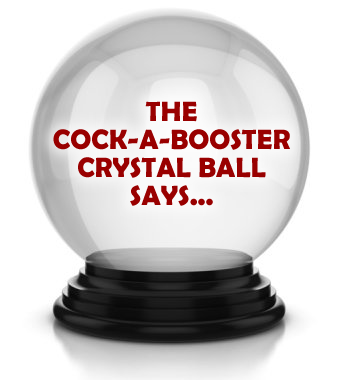 S. C. STATE at CLEMSON
Pickens County will open its favorite Cat House on Saturday, hoping the Overrated Orangies can claw up some visiting barkers from the Orangeburg Alpo Yards.  Buddy Pough and his raging “Rovers” plan to bury some gridiron bones in the upstate turf, but they may find the digging a tall order.  The home kittens have already been chopped by some red clay droolers in Athens last week.  Don’t expect it to happen again.
The Cockabooster Crystal Ball says... Moo U by 38

SAN JOSE STATE at AUBURN
The Hoplite Infantry of Southern California will sail some of their soldiers into Jordan-Hare on Saturday, hoping to capture the Fighting Malzhans in a pigskin noose.  War Eagle is expecting the attack on the plains, and will have their gridiron talons razor sharp.  Ancient Greeks don’t usually come knocking at Toomers Corner, and this group will be headed back to the left coast empty-handed.
The Cockabooster Crystal Ball says... Auburn by 18

OLE MISS at VANDERBILT
Colonel Reb and the Oxford Gentlemen stroll into the Nashville Shipyards this weekend, hoping to enjoy some mint juleps Derek Mason’s Music City Dinghy.  The Volunteer State Skippers know the refined rebels plan to be in town, and they’ll do everything possible to protect their vessel.  Too much mincemeat pie will carry the day.
The Cockabooster Crystal Ball says... Ole Miss by 10

MISSOURI at TOLEDO
Some astronauts from northwest Ohio will open up the Maumee Bay Glass Bowl on Saturday, hoping to declaw some visiting felines from the Show Me State.  The Columbia Catnips have no intention of being blasted into space by the Otter Creek Orbits, so the Lake Erie Torpedos better be carrying a lot of missile fuel.  Go with the Golden Kittens in this one.
The Cockabooster Crystal Ball says... Missouri by 13

CALHOUN ACADEMY at LEE ACADEMY
It will be the Cavalier Bowl on Friday night, as the Fighting Jareckis gallop away from Academy Road to invade the Lee County Jousting Fields.  The home squires promise to have their lances sharpened for the sporting affair, but the invading inamoratos don’t plan to be bested.  Look for the St. Matthews Duelers to head back down I-20 with their Paramour Feathers still in place.
The Cockabooster Crystal Ball says... Calhoun Academy by 9

EAST CAROLINA at SOUTH CAROLINA
A rowdy bunch of seafaring looters will sail into the Midlands on Saturday night, hoping to procure some pigskin plunder at the Bluff Road Poultry Plant.  Steve Spurrier and his scarlet hens have already been plucked a few times this fall, and may not have any gridiron plumage left.  If the Crimson Cluckers want to avoid being plopped in the fryer again, they better stop laying eggs.
The Cockabooster Crystal Ball says...   East Carolina in a big upset by 5.