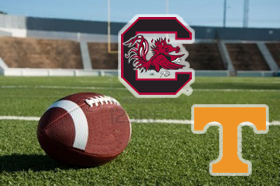 Tennessee at South Carolina
(USC is favored by 14)

For the third straight week, the Gamecocks will be battling themselves as much as they are their opponent.  Carolina has a very good football team, but can they shake off the mental ghosts and close strongly? If they do get the ship righted, they will likely finish the year with 11 wins again.  If not, the wheels could come off.

Bring in another case of gridiron psychosis, the Tennessee Volunteers.  Will either team really be excited or focused?  Tough to call.  When everything else is equal, you have to give the home team who is more talented the edge.

Gamecocks come out and get a win and finally get an open date, if the SEC actually allows it to happen.

What will this week bring?  Can UCS recover from a brutal stretch?  Will the faithful fill Billy Brice for a noon game?  Can Spurrier rally the troops to play a struggling Tennessee team?  How will the coaching issues at Tennessee affect their play?

Luckily for UCS, they have a defense.  One that can set the tone and steady a team.  One that can snatch momentum and hide it away, never to be seen from again.  One that can give the offense ample time to find their stride and get into a rhythm.

UCS’ defense does just that, but the offense still struggles.  UCS wins, and wins comfortably, but the scoreboard doesn’t say as much.

UCS 23, Tennessee 12 - UCS wins but does not cover the point spread 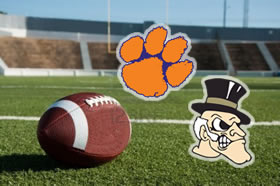 Clemson at Wake Forest
(Clemson is favored by 16)

There is no question that Wake Forest will entertain a fat and happy Clemson team that is ripe for an upset.  Having said that, Wake isn’t any better than any of the rest of the stink pool that makes up the ACC so they won’t be able to take advantage of it.  Clemson has one game of note on the schedule now and they are probably already getting ready for it.

Look for the Tiggers to loaf around and sleepwalk through a meaningless beating up of another high school squad posing as a college team.  This probably will yield some nervous moments early on with them pulling away late.  If anyone not from Moo U or Winston-Salem actually watches this game, then they honestly need to ask themselves where their life is going.

Tigers win and the rest of the country yawns.

Much has been made this week of two things: Clemson’s struggles on Thursdays and the Bowden/Dabo changeover.

In addition, there’s two additional pieces of info working against Clemson: the return of Wake’s leading receiver and the depletion of Clemson’s secondary.  Wake’s Michael Campanaro has been out since late September and the Wake offense has shown the effects.  For Clemson, Darius Robinson went down during the game, Baushad Breeland has been dealing with nagging injuries for a few weeks, and Jarrod Williams broke a leg during practice.

Plus, Clemson had its second worst offense performance under Chad Morris.  The offensive line was whipped and Boyd looked unsettled.  And it was about this time last year when Clemson lost its way.