Shame on you SEC 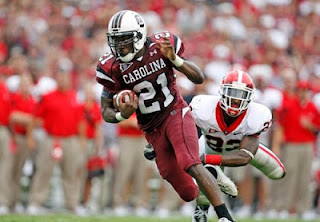 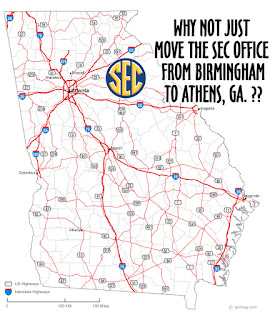 Now on to the idiotic Southeastern Conference and their raping of the SEC East Schedule to protect one team.  As was predicted BEFORE the year started, this “1-year” silliness was done for one purpose:  getting Georgia back to Atlanta.  The only thing that the SEC didn’t know was that a resurgent Florida would also get the green wiener as well.  Maybe they would have done things differently had they realized that but who knows?

But as we saw when Georgia played Carolina, the SEC knew that simply giving Georgia everything it wanted wasn’t enough.  So to make ABSOLUTELY sure, the plan included some bonus features for the Gamecocks:  1. Our schedule was given Georgia, @LSU and @Florida all in a row;  2. USC was given no open date until after the 9th game of the season, including the gauntlet games above;  3. Georgia was given an open date after game 6, and given a “warm up” against Kentucky before having to even play Florida after getting their rear ends handed to them by Carolina.

I don’t make the same derisive accusations about Florida because they actually had to play LSU and beat us head-to-head.  Although it is very “convenient” that they were given an open date after game 4 and before the week they played LSU; that game was in the swamp (we had to go to Baton Rouge and Gainesville) AND they were given a Vandy game in-between us and LSU.  But no, this is really about the conference’s insane bowing down to Athens, as the entire world pointed out was happening before the schedule was released AND predicted would happen thereafter.

Having clearly blamed the conference, let me close with a special message to the puppies.  (1 caveat:  I have some really cool Georgia friends who I like a lot, and props to Mark Richt for his classy prayer for Marcus yesterday.  So this next statement should just be ignored by them.  It is intended only for that lovely 70% of their fan base who will have to have this column read to them by their spouse/sibling, who are often the same person.)

In the spirit of the “Bad News Bears” congratulating the Yankees after they lost (clip below), this is from the heart and with a certain Calhoun County finger extended:  Jawja, “congratulations” on your probable East “championship.”  May the beating Alabama puts on you be worse than the spanking you took from LSU last year.  And don’t you worry; we’ll be there to pick you up by whipping you for the 4th straight season in 2013.  So you better start whining to the SEC now to avoid having to play us!

What a great time to be a Gamecock!
Posted by Cock-A-Booster at 10:27 AM