Spurrier changing the focus to the final 4 games 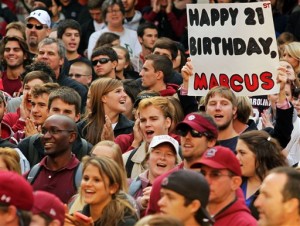 The entire sports world took some time this week to show some deserved respect and kindness toward Marcus Lattimore.  This outpouring of emotion was a strong testimony about how good of a person #21 is outside of football as much as anything he has done on the field while in Columbia.  From Dabo to Les Miles to all sorts of athletes and coaches in other fields of play, it was really cool to see.   I have no doubt it touched the Gamecock star while he is beginning the healing process.

But now it is time for Carolina to turn its focus to the final four games we have to play.  Lattimore wouldn’t have it any other way.  The best way we could honor him would be to play like he would if he were on the field.

I honestly believe that was on Steve Spurrier’s mind when he took a good-natured jab at Dabo Swinney during Lattimore’s birthday celebration on the Horseshoe yesterday.  Sometimes coaches have to do things to make them the focal point to help change the subject.  No one understands this more than Dabo.  Last year, Swinney staged a pre-planned insane rant attacking the University of South Carolina and everything for which it stands.  When did this happen?  Right after Carolina had just mauled the Tigers in Columbia for the third straight season.  Yabble Dabble had to do this to distract his fan base away from the loss and channel their anger and passion away from him to the Gamecocks.  It didn’t even matter that the 5 minute plus rant was because of a quote that was falsely attributed to Steve Spurrier.  It did the job well and distracted the fans.

So you’ll have to forgive me if I yawn at any faux “OUTRAGE” over Spurrier’s 1-liner about Swinney yesterday at the pep rally for #21.  At worst, it was maybe a tad forced but I seriously doubt anyone actually thinks there was malicious intent.  No, in my opinion this was just a verbal distraction to get USC fans focused on football again and it has worked beautifully. 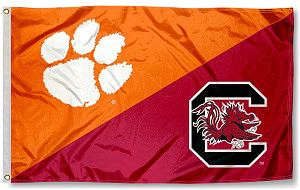 The media folks and twitterville all went bananas and Clemson will use this as bulletin board material and that’s all fine.  And expected.  Tiger fans can focus on one or two throwaway jabs from Spurrier and we’ll just keep playing that five-minute tape from the insane one heading into this year’s kickoff at Death Valley.

None of that will affect the outcome of the game.  Granted, whichever team wins will have fans insisting that it did.  But outside of making the pregame debate a little zesty it won’t.  Once the ball is kicked off you will have two good teams showcasing the Palmetto State and that’s a good thing.  Clemson will likely be 10-1 and we will likely be 9-2.  Both teams will be in the top 10.  Great offense being tested by a great defense.  Strength against strength.  Should be a fun way to close the Thanksgiving weekend.

In the meantime there is more football to play.  We have to find a way to stop our streak against the Hogs and avoid stubbing our toe against the Terriers and their funky offense.  Clemson has to beat I think Hammond, Wilson Hall and Calhoun Academy. ( J/K Tigger friends.  I can’t imagine Clemson letting teams that tough on the schedule.  J)  All kidding aside, let’s stop finding ways to be offended on both sides and just enjoy this rivalry with a little fun and good-natured trash talk.

What a great time to be a Gamecock!
Posted by Cock-A-Booster at 10:07 AM